Do you have a Tech or Research idea?

Use E-TAP to collaborate with COSIA

Picture a drilling rig. Now, picture a flying drilling rig. The SkyStratTMdrilling rig is a rig Cenovus developed to improve the drilling of stratigraphic wells in the oil sands. It is approximately two-thirds the size of a conventional rig and can be transported by helicopter, allowing the company to access remote drilling locations year-round. Cenovus is sharing aspects of the SkyStratTM drilling rig through COSIA’s Land Environmental Priority Area (EPA).

Stratigraphic test wells are exploratory wells that provide information about the geology in a certain area. The information indicates if a well in that area is worth pursuing. Stratigraphic wells are often drilled in remote areas and, prior to the SkyStratTM drilling rig, had to be completed in the winter when the ground is frozen and can support heavy rig equipment.

Transporting the SkyStratTM drilling rig and crew by helicopter eliminates the need for temporary roads, which significantly reduces the surface footprint. Due to its innovative design, it also has the potential to reduce water use for drilling operations by up to 50 per cent. Further reductions in water use are achieved by not having to use additional water to freeze in winter roads. 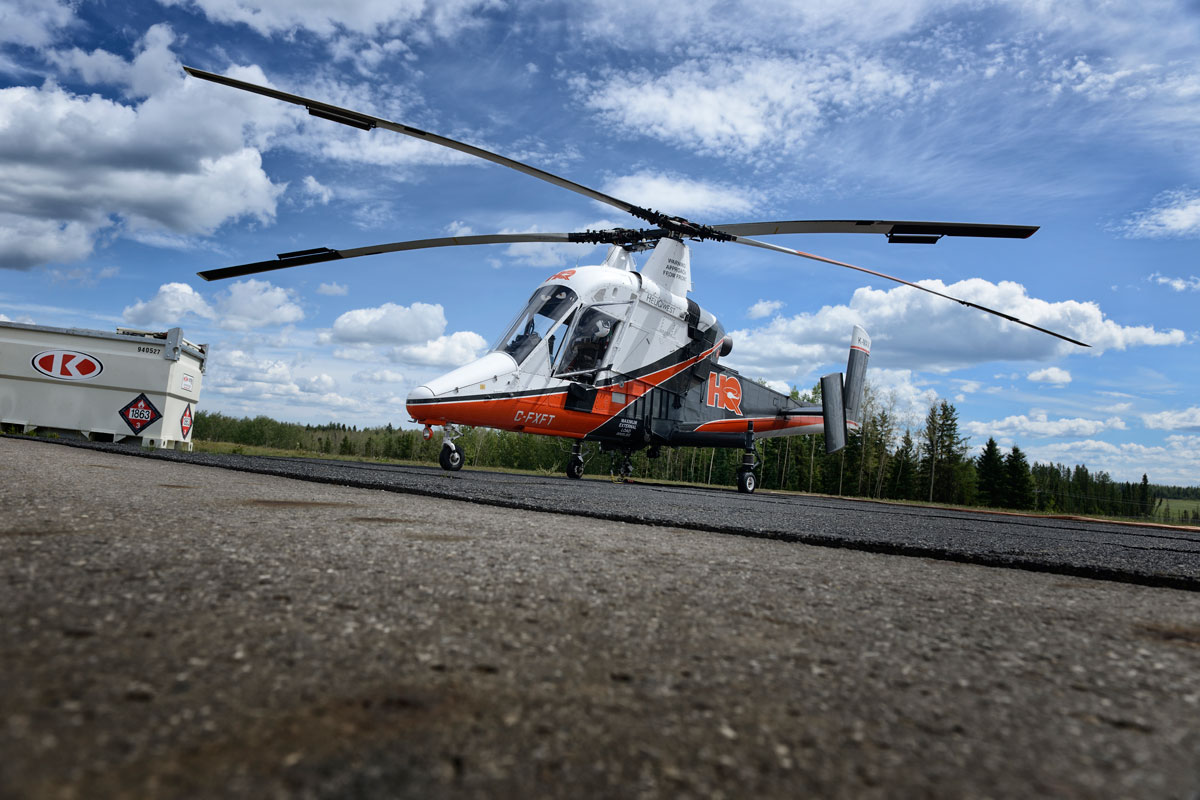 The SkyStratTM drilling rig is an excellent example of how innovation and technology can help industry reduce the environmental footprint of natural resource development.

Most exploration and production companies don’t own or operate their own rigs. However, Cenovus saw an opportunity to develop a new approach to doing business and, rather than wait for a drilling company, decided to pursue the idea on its own.

Drilling numerous stratigraphic wells in the standard three-month winter drilling season often results in high costs and a seasonal workforce. In 2010, the company’s drilling team was looking for ways to drill stratigraphic wells year-round while minimizing their environmental footprint. They became intrigued by drilling rigs in the hard-rock mining industry, which are transported by helicopter to remote locations in mountainous terrain.

Cenovus adapted equipment used in the hard-rock mining industry to develop a rig that is smaller and lighter than a conventional rig and can be broken down into pieces. The company drilled two wells in August 2010 at its Foster Creek oil sands operation using a hard-rock mining drilling rig equipped with conventional blow-out preventers and a well control system. The success led the company to build a new rig. The SkyStratTM drilling rig stands about nine metres tall, nearly two-thirds the size of a conventional drilling rig and less than half the weight. It is moved, in pieces, with a helicopter designed for lifting heavy loads.

Learn more about the project

Cenovus tested the prototype in the winter of 2011-2012 at its Christina Lake oil sands development, which has established roads. Both Cenovus and the regulators wanted to test safe operations with the comfort of existing infrastructure.

The initial test was a success. Cenovus tested the heli-portable capabilities of the rig in the spring of 2012 by drilling 11 wells north of Fort McMurray in a remote area typically only accessible during the winter. Both the rig and crew were transported by helicopter. The SkyStratTM drilling rig has been used to drill additional stratigraphic wells ever since.

The fact this moved from an idea on a whiteboard to a full prototype test in less than two years is a true testament to the commitment of everyone involved.

The SkyStratTM drilling rig also has the potential to reduce water use for drilling operations by at least 50 per cent. Further reductions are achieved by not having to use additional water to freeze in winter roads.

Additionally, by enabling year-round drilling, the SkyStratTM drilling rig could create long-term job opportunities for rig workers, which should decrease seasonal turnover and potentially improve safety performance by having a consistent workforce operating the rig throughout the year.

Cenovus worked with Hy-Tech Drilling Ltd. and numerous other contractors to design and build the SkyStratTM drilling rig. The company also had full support from Alberta’s regulators, including the Alberta Energy Regulator (AER), Alberta Energy, and Alberta Environment and Sustainable Resource Development (ESRD).

As a founding member of COSIA, Cenovus is sharing aspects of the SkyStrat™ drilling rig through the Land EPA.